Why I am not a hypocrite

EDITED: The mom I refer to below has since reached out & apologized. Water under the bridge. Love it SO much.
------------------------------
You did it. You pushed it over $1000. I'm actually now at $1353. Keep it coming. We’re more than halfway there!! Click here for the link.
I need to share something. Let me preface it by saying that I am anything but insincere or inauthentic. If anything, I am often too brutally honest and don't show enough discretion when I dislike something. #CharacterFlaw
I have never pretended to be overjoyed that my son Benjamin has Down syndrome. I have come to realize that there are many different types of parents who have children with DS. There are the Bumper-Sticker-Buddy-Walking-Don't-Say-The-R-Word-Advocate parents. On the other end of the scale are the Woe-Is-Me-What-Happened-To-MY-Plan-Why-Is-This-My-Reality parents. Then you have a WHOLE range in between.
I used to be the latter kind of parent. And in some ways, I still am. Down syndrome sucks most days. It doesn't mean I don't ADORE and LOVE my Benjamin. That I don't want him. But the reality is--He struggles. Is he cute? Absolutely. Has he changed my life for the better? ABSOLUTELY. Would I take his DS away? Ummm....maybe. But I can't. So why torture myself with the possibility?
I'd like to talk about that first type of parent that I mentioned. To be honest, I used to resent them. I thought they were fake. Or crazy. Or both. I couldn't comprehend what they meant when they said that Down syndrome was the best thing that had ever happened to them. That they wouldn't take it away if they had the chance.
But the MOST IMPORTANT thing that this journey has taught me is acceptance. That my thoughts do not have to align with yours in order for yours to be valid to you. That no one has the right to judge anyone else for how they process their emotions, no matter how long it takes them. There is nothing WRONG about the way they feel about Down syndrome. How dare I judge them?
Shortly after I announced that I was running the NYC Marathon for a DS charity, I saw something on IG that disturbed me. A fellow mother of a child w/DS posted a picture of the definition of the word "hypocrite" and stated that she's all for DS research, but if you're gonna talk the talk, you need to walk the walk. That it bugs her when people use DS to benefit themselves. For something they want to do.
OUCH.
While I wasn't named specifically, this was posted within the hour that my fundraiser that went live. From a mother who has a child with DS and who is also a runner. She then edited her comments to take out all of the part about Down syndrome. But I saw it before she deleted it.
I was so hurt at first because I wondered if that WAS what I was doing. "Using" the fact that my son has Down syndrome to tug at the heartstrings of others to get to run the NYC Marathon.
And then I realized...NO. ABSOLUTELY NOT.
The reason that charities offer bibs to racers is to raise money. To raise awareness. And guess what? The runners who run with charities, though dedicated to their cause, are not 100% selfless. THEY WANT TO RUN THE RACE just like the runners who do not run for charity.
The specific mission of my particular charity, Research Down Syndrome, is to fund and support scientific research directed toward the development of safe and effective drug therapies that will improve memory, learning, and communication in persons with Down syndrome and address the increased likelihood for Alzheimer’s disease.
Did you know that studies suggest that more than 75% of those with Down syndrome aged 65 and older have Alzheimer’s disease, nearly six times the percentage of people in this age group who do not have Down syndrome? Scientists aren’t exactly sure what role the extra chromosome plays in this, AND THAT IS WHY WE RAISE MONEY. To keep my Benjamin and ALL the other Benjamins around as long as possible. To give them as fulfilling of a life as we can give them. To help them improve memory, learning, and communication.
And that is why I am running NYC. Not because I am using DS. Is running the NYC a complete dream and bucket list for me? ABSOLUTELY. And I am so very proud to be doing it FOR A PURPOSE. Thank you all from the bottom of my heart for helping me to do so.
Posted by Angela at 9:08 PM

Click here to read more about us and to get to know me a little better--UPDATED! 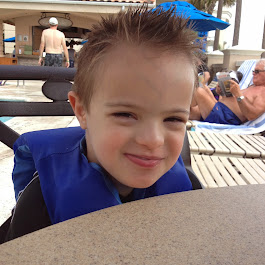 Click here to read my essay about the day my sweet Benjamin was born.

I lost 23 pounds before getting pregnant again!

Click here to read my weight-loss story and to see comparison pictures!

Angela
I am a stay-at-home mom and love it! Matthew and I have been married since November 2000. We have three sons, Andrew (3/24/06), Benjamin (4/24/08), and Thomas (3/25/10). We found out after Benjamin was born that he has Down syndrome and heart defects. He had open-heart surgery and intestinal surgery in the first ten months of his life, and he is doing wonderfully. Life is never dull with three sons!